National Book Trust, India celebrated Bhartiya Bhasha Diwas on 11 December 2022 at its Headquarters in New Delhi and simultaneously in all Regional Offices, Book Promotion Centres and Bookshops across the country.

A Speech Contest was organised at the Kashi Tamil Sangamam on the theme of “Shared Knowledge – Shared Traditions” which saw enthusiastic participation from many school and college students in Hindi and Tamil. The students talked about the common thread in literature and culture joining all parts of the country as one entity, and adding to the spirit of Ek Bharat Shreshtha Bharat. 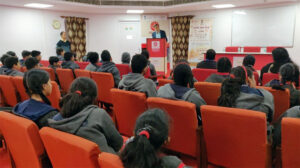 Shri Yuvraj Malik, Director, NBT-India addressed young students who visited NBT-India Headquarters in Delhi, and talked in detail about Bhartiya Bhasha Diwas and the 140th birth anniversary of Subrahmania Bharati. He spoke of the importance of knowing multiple languages as an aid for the nation’s development, building unity, and realising the goal of Ek Bharat Shreshtha Bharat. He encouraged them to take pride in their mother tongue, and also learn other Indian languages to communicate better with their fellow countrymen. 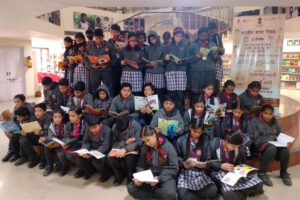 Various events were simultaneously organised in Regional offices of NBT-India located in Mumbai, Kolkata, and Bengaluru as well as at all Book Promotion Centres and Bookshops across Lucknow, Guwahati, Imphal, Agartala, Cuttack, Dehradun, Patna, Bhopal, Hyderabad, and Kochi, as well as in Delhi Metro bookshops, to celebrate all Indian languages and to emphasise the importance of knowing more than one language. Children read books in their mother tongue and the official State language, and participated in storytelling and story-writing competitions.

Through the organised activities, the students learned about languages spoken in different regions, nature and structure of tribal languages, to say commonly spoken phrases and sentences in every major language of India, and also learn about the rich literature of these languages. More than 1000 students participated in this celebration of languages across the country at more than 16 NBT-India stores. 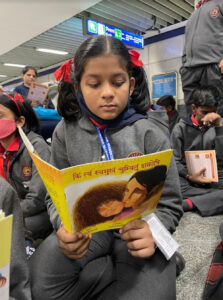 NBT-India also visited the NCERT Campus at Sri Aurobindo Marg, New Delhi with its Mobile Exhibition Van (MEV) showcasing a variety of titles published across genres in more than 50 languages. While inaugurating the Mobile Exhibition Prof. Dinesh Prasad Saklani, Director, NCERT commended the efforts of NBT-India in making books available in multiple Indian languages for readers across the country.