The first volume of the Punjabi translation of Shri Guru Bhagwat, originally composed in Odia by Dr. C.B. Satpathyji, was released by him at Sai Ka Aangan, Gurgaon. The Punjabi translation has been done by Dr. Ranjit Singh and Dr. Jasvinder Kaur Bindra. Smt. Harjit Chhabra and Smt. Geetika Rishiraj has contributed personal interest in the completion of the work.

The Odia version of the epic, comprising more than thirty-four thousand lines, has been published in eight volumes. Besides being translated into English and Hindi, a few volumes have also been translated into various other Indian languages like Sanskrit, Bengali, Assamese, Telugu, Tamil, Gujarati, Sindhi, Kashmiri, Bhojpuri, Kannad, and Marathi. 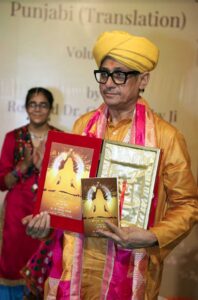 This first volume of the Punjabi version is primarily based on the definition of a Sadguru, classification of Gurus and Saints, Shuddha Yogi, Bhrashta Yogi, Guru mandali, Shri Guru disciples, types of bhaktas and Gurus, the concept of Guru’s Ankit Santaan and Diksha daan. An audio CD of the Shri Guru Bhagwat Volume I originally written and composed by Dr. Satpathyji has already been released in the year 2015 by Times Music. The famous Punjabi playback singer Ms. Harshdeep Kaur has lent her voice to the verses.

On this occasion, Smt. Monisha Sharma and the children of Sai Ka Aangan sang stanzas from Shri Guru Bhagwat. Dr. Satpathyji addressed the audience after the release of his book and mentioned that Shri Sainath and other Sadgurus led a simple life. He reinstated that simplicity leads to progress.