Coimbatore : The usual windy and sunny weather of Coimbatore took a different turn today as rains washed up the Kari Motor Speedway at the start of the Round 2 of the 25th JK Tyre FMSCI National Racing Championship 2022. Despite that, the day was filled with some exciting performances from the seasoned and the rookie racers across LGB Formula 4, JK Tyre Novice Cup and JK Tyre presents Royal Enfield Continental GT Cup.

Inaugural day of Round 2 was off for a battle on the rain-drenched track with the JK Tyre Novice Cup taking off first. With Chennai-lad and tally topper Kyle Kumaran being absent from this round, there was a good chance for Hasten Performance’s Aadithya Parasuram, who was second overall with 27 points. But, at the end, he finished Runner-up, as MSport’s Aman Nagdev bettered him to finish at top of the podium, while DTS Racing’s Joel Joseph finished a close third.

With a little change of the schedule due to rain, the LGB Formula 4 started as the second race of the day pushing the Royal Enfield Continental GT Cup. The race started as a wet race and saw the comeback of defending champion Vishnu Prasad, who was absent in Round 1. With MSport’s Ruhaan Alva missing this round due to the World Motorsport Games in Marseille, and Arya Singh leading the overall tally, the race was up for surprises from the seasoned campaigners. 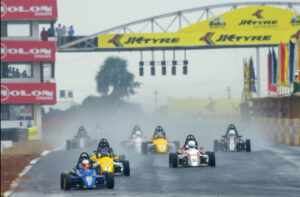 After an exciting face-off braving the rainy track, it was Ahura Racing’s Viswas Vijayaraj who bettered Vishnu Prasad to finish at top of the podium, while Tijil Rao secured the third spot at the LGB Formula 4.

The Race 3 of Round 2 started with the second race of JK Tyre Novice Cup. It soon turned out to be a fierce battle among the young racers and the table completely turned with Arjun Syam Nair from Momentum Motorsports claiming the top spot of the podium, his first this edition, while DTS Racing’s Vinith Kumar, and MSport’s Dhruvh Goswami followed at close 2nd and 3rd respectively. 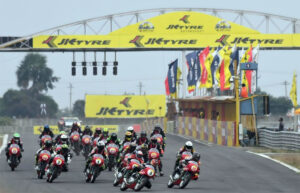 With weather getting better by the day and the track drying up, the Royal Enfield Continental GT Cup finally took off as the fourth and concluding race for Day 1. The Pro-Am Series format race saw 10 professional and 15 amateur riders competing on the grid. Seasoned campaigners Anish D Shetty and Allwin Xavier battled it out throughout the race, although it was Anish who claimed the top spot overall at the podium, while Navaneeth Kumar came 2nd, followed by Soorya PM at a close 3rd. Category-wise, Anish topped in the professional category, followed by Navaneeth at the 2nd and Allwin at the 3rd place. The Amateur category was topped by Soorya PM, followed by Pradeep C at 2nd, and Ashish Patel at 3rd respectively.

Overall, it was a power-packed and surprise-filled Day 1 of the Round 2 of the 25th JK Tyre FMSCI National Racing Championship – 2022.  Although it was a rainy start, the weather turned pleasant by the second half.

With more races across the categories lined up for Day 2, it is going to be an even more intense Sunday for the Round 2 of the 25th JK Tyre FMSCI National Racing Championship.