Rajeev Mehta, General Secretary, Indian Olympic Association was the guest of honour at the event.

Dr. Rashmi Saluja, President of the Curling Federation of India and Executive Chairperson of Religare Enterprises Limited, India’s most diversified financial services business, felicitated the winning team at a glittering ceremony today at Hotel Radisson Blu Marina, Connaught Place, New Delhi. She also presented kits to the Indian Curling team set to represent India in the upcoming Indo-Kazakhstan Curling Championship 2022. The Indian Curling Team Jersey was also unveiled by her at the event. 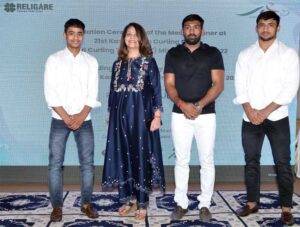 Champion wrestler and Padma Shri awardee Yogeshwar Dutt, Olympic and Commonwealth Games medalist, and Rajeev Mehta, Secretary General of the Indian Olympic Association, were some of the prominent dignitaries to grace the occasion.

Religare is a firm believer in inculcating a culture of sports and rewarding players for their achievements. The event was part of Religare’s efforts to support and popularize the sport of Curling in India by recognizing the game’s practitioners.

Unveiling the Jersey, Dr. Rashmi Saluja remarked, “We are happy with Indian Mixed Doubles team’s victory in the World Curling Tour (WCT). I extend my best wishes to the Indian contingent at their singular achievement. The Religare family is ecstatic to be a part of India’s evolution at Curling and wish Team India more success in the coming years.