Dr. Bhagwat Kishanrao Karad, Hon’ble Minister of State for Finance today recalled contributions of  a few princely states towards eradicating social evils and the roles their Kings played in the freedom movement of the country. He was speaking at the book release function  of   ‘Quest For Swaraj: Historical Journey of a Nationalist Prince’ authored by Dr. S C Misra and published by National Book Trust, India,  held  at NBT Head Office in New Delhi on 16 June, 2022.

Releasing the book, Dr. Bhagwat Kishanrao Karad, said that, the books highlighting the contributions of unsung heroes of the Indian freedom struggle being published by NBT are a great way to familiarise the younger generations with sacrifices made for the independence of the nation. He further said that the book ‘Quest for Swaraj : Historical Journey of a Nationalist Prince’  would continue to guide the future generations and pays tribute to a revolutionary icon, Maharaja Kishan Singh.

Smt. Rohini Grewal, granddaughter of Maharaja Kishan Singh was the Guest of Honour at the event. She appreciated the efforts of the author in encapsulating the true essence of the Maharaja and his beliefs in the book. She further added that the impact of his efforts and achievements pertaining to women and marginalised sections of the society are still visible..

Dr.  S C Mishra, author, said that it is probably for the first time that a serious attempt has been made to reveal the story of an unsung nationalist prince, Maharaja Kishan Singh.

Eminent lawyer Shri Dharam Gopal Chaturvedi, said that the book is about  a prince who lived a dignified life undismayed by British interference. He added that the various welfare initiatives launched  the King have  also been acknowledged by the Constitution of India through various amendments.

Shri Yuvraj Malik, Director NBT said that it is the moral responsibility of the citizens to be aware of  country’s glorious history.

To commemorate the 75 years of India’s independence, NBT-India under the Azadi ka Amrit Mahotsav, Government of India programme, has also launched a new publishing series India@75 for young and general readers. The books under this series reflect the momentous, yet wonderful journey of India. As a part of the series, books on freedom fighters, major achievers ,events and themes that have shaped the modern India are being developed. 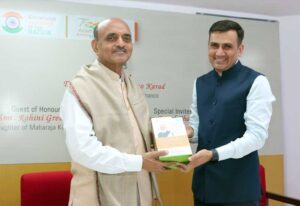 The book deals comprehensively with Maharaja Kishan Singh’s efforts towards ushering in the wave of socio-cultural democratic nationalism in the custom-ridden monarchical system of the Bharatpur state.

Maharaja Kishan Singh’s contribution to the nationalistic fervour in the Bharatpur state can be summarised mainly in four areas, viz. making serious efforts for the unification of the diverse sections of the indigenous society; enlightening peoples’ mind through personal interaction and promotion of literary lore preserved in Hindi; liberalising the age-old undemocratic customs  related to women and the depressed classes; and democratising the temper of the State’s administration through the introduction of the scheme of ‘Shashan Samiti Vidhan’.

It is worth mentioning here that NBT has recently launched a plethora of initiatives to celebrate ‘Azadi Ka Amrit Mahotsava’ which seeks to showcase the achievements of India as an independent and self-reliant nation by highlighting the struggles and contributions of national movement leaders as also the unsung heroes.

Dr. S. C. Misra, author of ‘Quest for Swaraj: Historical Journey of a Nationalist Prince’ has to his credit approx 60 research papers, published in the national and state journals of history; four research publications and a book in Hindi entitled ‘Marathaon Ka Itihas.’

His writings and researches have traversed beyond history since he researched and wrote ‘Sanskriti Ke aaine mein Hanumat Charit’ as well as collection of poems entitled ‘Baat Mere Antarman Ki’. The present research publication, ‘Quest for Swaraj: Historical Journey of a Nationalist Prince’ is a pathbreaking work.