Chemin Esports’ player Parth Garg aka CesDeltaPG gave an outstanding performance to secure his position in the list of top 5 FRAGGERS. He had a tally of 39 Finishes just behind the Frag Leader who had 44 Finishes. 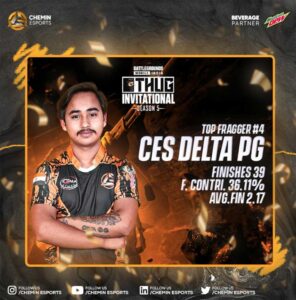 Speaking on his team’s win, Chemin’s Founder and Director, Ishan Varma, said, “I am happy the way our team is performing, and the consistency to lead the leagues this year. This year, we are growing steadily and we plan to add Pokémon in our Esports line-up. We foresee to lead the Esport industry in the coming years.”

Sixteen teams qualified for the Grand Finals from the group of thirty-two teams that were part of the BGMI’s League Stage of Thug Invitational Season 5. Chemin Esports qualified for the Grand Finals in style finishing on top of the table with 173 Points, and Justin Nadar aka CesJUSTIN topped the FRAGGER list during the league stage with 33 Finishes.

The league stage was scheduled between 9th to 17th May 22, and the Grand Finals were from 18th to 25th May. Sixteen teams played twenty-four matches in four days. Brands like Monster Energy, LOCO, AORUS, Intel, and Villager Esports were associated with the BGMI’s 8BIT Thug Invitational Season 5.