Anand Mahindra’s Father, Harish Mahindra, Graduated from the Fletcher School in 1946 and was the School’s first alumnus from India

Anand Mahindra tells Fletcher School graduates to “Shape the world as it ought to be, rather than accepting it as it is” and “May you wander through the world with wonder and purpose.”

New Delhi  : Anand Mahindra, Chairman of The Mahindra Group and Non-Executive Chairman of Mahindra & Mahindra Ltd, delivered the Class Day address and was awarded the Dean’s Medal by the Fletcher School of Law and Diplomacy, Tufts University, U.S.A. Anand Mahindra’s father, Harish Mahindra, graduated from the Fletcher School in 1946 and was the School’s first alumnus from India.

Initiated by Dean Ted Eliot in 1983, the Dean’s Medal is awarded in recognition of significant achievement in global leadership.

Dean Rachel Kyte announced the recipient of the 2022 award, Mr. Anand Gopal Mahindra. Mr. Mahindra, Chairman of The Mahindra Group and Non-Executive Chairman of Mahindra & Mahindra Ltd, is one of the world’s most influential industrialists.

Mr. Mahindra has grown The Mahindra Group into a diversified global conglomerate, which now employs more than 250,000 people in over 100 countries. He has created successful business operations in renewable energy, agriculture, automotive, IT, aerospace, real estate, education, and more. He has been a pioneer in the evolving role of business, its responsibilities and its necessary partnership with गवर्नमेंट। He has led the dialogue and action from the private sector on critical issues like climate change, sustainability, and social responsibility.

Mr. Mahindra served on the Global Board of Advisors of the Council on Foreign Relations, has been named to Barron’s List of Top 30 CEOs worldwide, and was noted on Fortune Magazine’s list of the World’s 50 Greatest Leaders. 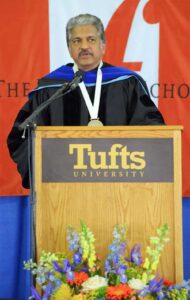 Mahindra’s Address : Mr. Mahindra spoke of the pleasure of making his first visit to The Fletcher School to retrace the steps of his father – a member of the Class of 1946 and Fletcher’s first Indian student.

Embarrassed that he never made his way to Medford while a student at Harvard University, he admitted that his only interaction with Tufts was his visits to the Dental School for dental work. “Speaking at Fletcher’s Class Day is my finest hour,” he announced.

He spoke fondly of his father’s closest friendship at Fletcher, and expressed hope that the friendships made by this year’s graduating class would help to ‘unite the world’, as his father’s had.

Mr. Mahindra told the audience that his company’s 250,000 employees are driven by the purpose of the company. “Purpose can evolve and transform. Never underestimate the power of purpose in business, or in life. I urge you to take small steps to change the world around you,” Mahindra said.

He advised the students in attendance, “Shape the world as it ought to be, rather than accepting it as it is,” adding, “Harness the power of purpose.”

In his closing remarks, Mr. Mahindra said, “You will have no difficulty finding inspiration in the people around you. People will find ways to make the world the way it ought to be. In a way, you are all pilgrims searching for answers. A pilgrim is a wanderer searching for an answer. May you wander through the world with wonder and purpose.”