Darjeeling : After three days of intense battle which tested the mettle of humans and machines, the team of Sk Ajgar Ali & Md. Musthafa were crowned champions of JK Tyre Indian National Regulatory Run Championship (INRRC) 2021. The duo of Sk. Aniruddha and Raj Kumar Mundra finished second, while the driver-navigator team of Subir Roy and Nirav Mehta took the final step of the podium.

The INRRC Ladies Cup was lifted by the Pune team of Sheena Sabharwal (driver) and Trupti Gupta (navigator) while the Gurgaon-Mumbai team of Jasmeet Kaur & Jyothi Iyengar came second. The third position in this category went to the mother-daughter team of Nilasha and Ipsita Das from Kolkata. 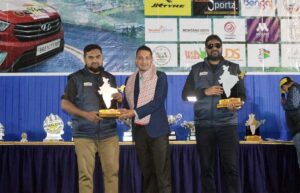 The first prize in the INRRC Adventure category was bagged by Jit Mitra & K.Dinky Varghese while the second prize went to the team of Abhijit Singh & Ibrahim Ali Shaikh. The third position was bagged by Nishan Choudhury & Chandrasish Roy. 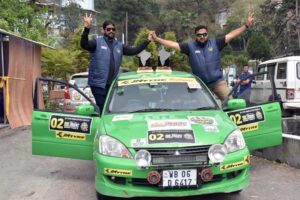 JK Tyre Himalayan Drive 8 (HD8), which was the Grand Finale of INRRC 2021 started from Siliguri on March 24 and culminated in Darjeeling in the evening of March 26. A total of 24 teams, including seven all-ladies team, took part in this event.

Several big names in this format of motorsports locked horns in the bid for the coveted crown. The 24 teams had reached the finals after going through gruelling qualifying rounds at the six zonal levels in Northeast, East, North, West, Central and South India.

The competitors had to navigate through some very tough terrains, including dirt tracks, river beds and hilly terrain. The river beds on the first two legs of the rally proved to be especially challenging with many vehicles getting bogged down in the sand, gravel and rocks leading to seeking assistance of the recovery team to be pulled out.